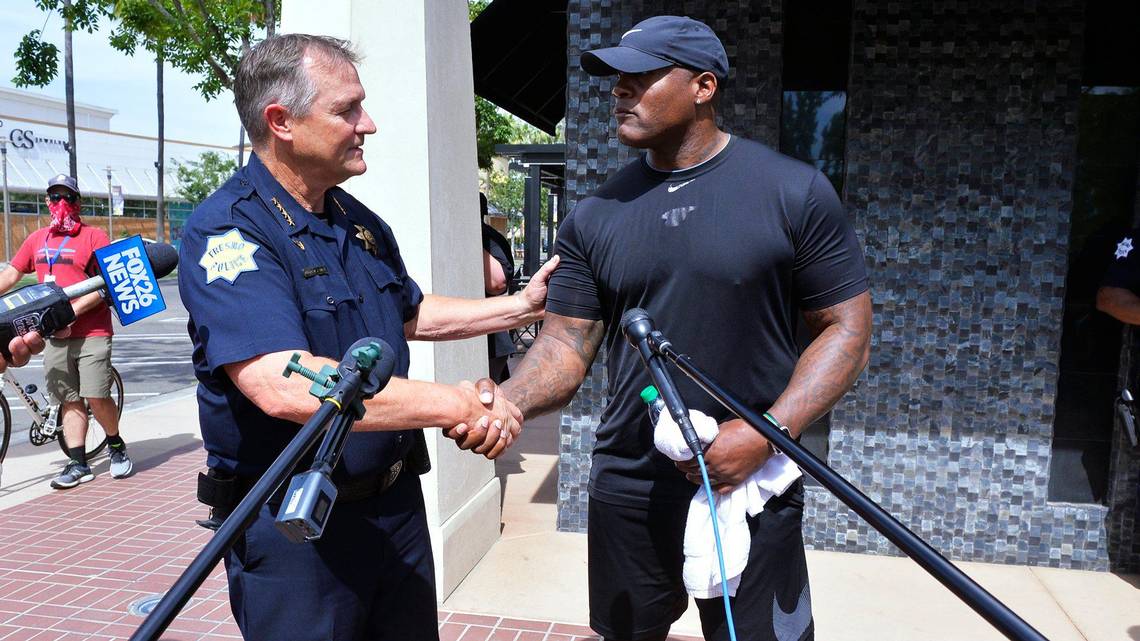 BY FELICIA ESPINOSA AND KATHRYN FORBES

Of course, this is ridiculous. No one would look at these two statistics and think that one causes the other. The two phenomena just happened to have occurred at the same time.

But this type of faulty reasoning (or, in this case, fearmongering) abounds in public discussions of crime. Just look at Fresno Police Chief Andy Hall’s latest Facebook comments, widely reported in the local media, which blame a three-month rise in the rates of gun violence and stabbings on both the $0-bail schedule and on widespread calls for police reform: “Sadly, I also believe that the attack on the police profession and the lack of support from some of our elected officials is contributing to this spike in crime.”

Crime spikes happen. They often cannot be readily explained — especially statistical blips like the one Chief Hall is talking about. But that does not stop people like him from using such false correlations as a basis for policy. “Crime is up,” they say, “so buy us more guns. Give us new cars. Stop talking badly about us.”

Nowhere in Chief Hall’s post does he address the elephant in the room — the violence and harm wreaked by COVID-19 and the deep threats to community safety the pandemic poses. Communities already struggling from a pattern of disinvestment are now suffering even more. Many people have lost their jobs and their access to health care. Food insecurity in households has intensified. Overburdened social service agencies cannot keep up with increasing demand. And, for the foreseeable future, the shift to online schooling will continue to disproportionately impact under-resourced children.

But, sure, chief, tell us more about how our community is threatened by canceling the bail requirement for the person accused of stealing a bicycle.

As a reminder, Chief Hall, for some time now bail policies have been targeted for reform because they criminalize poverty. As documented by The Bail Project, “People in pretrial detention now make up more than two-thirds of American’s jail population. They are presumed innocent under the law, yet they will suffer the harms of incarceration unless they have enough money to pay bail and buy their freedom.” In response to the spread of COVID-19, California’s Judicial Council allowed bail to be set at $0 for those awaiting trial for nonviolent misdemeanors and felonies. To put it another way, the $0-bail statewide order did nothing more than release people who previously would have been released on bail anyway — if they had the money.

Most recently, more than 700 incarcerated people and 40 correctional officers have tested positive for COVID-19 at the Fresno County Jail. Chief Hall’s failure to recognize this pernicious health threat is especially reckless. For political gain, he endangers people’s lives, including the lives of jail employees. This is nothing new for Fresno law enforcement: Chief Hall’s tactics fall right in line with Sheriff Margaret Mims’ vociferous opposition to bail reform and, for that matter, to any initiative that prioritizes community well-being over increased funding and power for law enforcement agencies.

The widespread calls for police reform simply ask government officials to truly value life and community safety. People are asking our elected officials to redirect taxpayer money from law enforcement to shared public goods like affordable housing, K-12 education, youth programs, senior centers, mental health services and job training. Community members know that our shared vulnerability is a result of decades of failed government policies, including ones that support a predatory bail industry. Calls for reform are a re-imagining of public safety — one that centers the actual needs of the community.

Chief Hall’s Facebook post illustrates that he still has not reckoned with Fresno police’s legacy of violence and discrimination. Nor has he understood our community’s demands for a healthier and safer Fresno. Instead, he has chosen to opportunistically deploy empirically false ideas about criminal threat to build support for business-as-usual policing.

But there is no time for business-as-usual policing, politics, or governing. The global pandemic has brought to the fore the brutal consequences of pernicious health inequities, the maldistribution of resources, and the abhorrent nature of our carceral system. We cannot act fast enough. Community members have been demanding change. Government leaders, including those in law enforcement, must listen to them.

‘The Child is Doing Prison Time with the Parent’