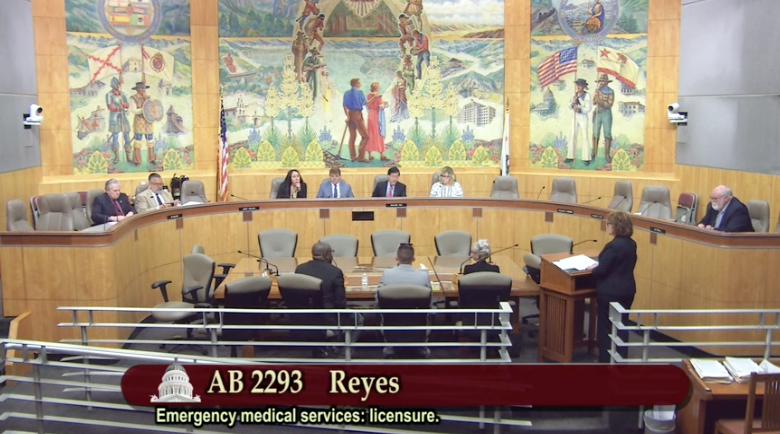 This video features a CA Senate Health Committee hearing at which Mathew T. an Anti-Recidivism Member who was previously a firefighter at a juvenile fire camp during his incarceration, testified to the necessity of AB 2293 (described below). The bill is heard from 1:06:42 – 1:17:40 in the video.

AB 2293 by Assemblymember Eloise Reyes (D-San Bernardino) was signed into law by Governor Brown. The bill requires local emergency medical service (EMS) agencies to submit data on the approval or denial of EMT-I and EMT-II applicants with criminal records. The bill will also create greater transparency in the hiring practices of local EMS agencies, and will contribute to a better understanding of how to achieve more equitable hiring practices for job applicants with a criminal history.

“If a person is convicted of a crime and pays their debt to society, that one mistake should not become an economic life sentence  that shuts them out of the job market even after they have completed rehabilitation.” Assemblymember Reyes continued, “AB 2293 will begin the process of diagnosing the full scope of the licensing barriers that prevent many in our state from attaining positions that require these licenses but flatly deny them based on the presence of any criminal history.”

“AB 2293 is an important first step to fixing California’s counter-productive licensing policies regarding EMT’s and Firefighters,” said Jael Myrick, the Clean Slate Practice Program Coordinator at the East Bay Community Law Center, and a Co-Sponsor of the bill. “Over 8 million Californians, including many who may have fought fires as prisoners, face unnecessary barriers when they try to get licensed to work in the very fields they are most qualified for and where we need people most.”

Approximately 30% of all jobs in the state of California require some type of license, up from the national average of around 25%. At the same time, approximately 1 in every 5 Californians have some sort of criminal background that leads to a growing segment of our citizenry that are procedurally locked out of a large portion of the job market. In 2017, over 4,500 inmates served in the California Conservation Camp program and contributed over 10 million work hours to fighting forest fires and conservation efforts around the state. However, upon release and for years later, they are locked out of the job market by their criminal records.

For more information on AB 2293 or to read the language of the bill, click here.