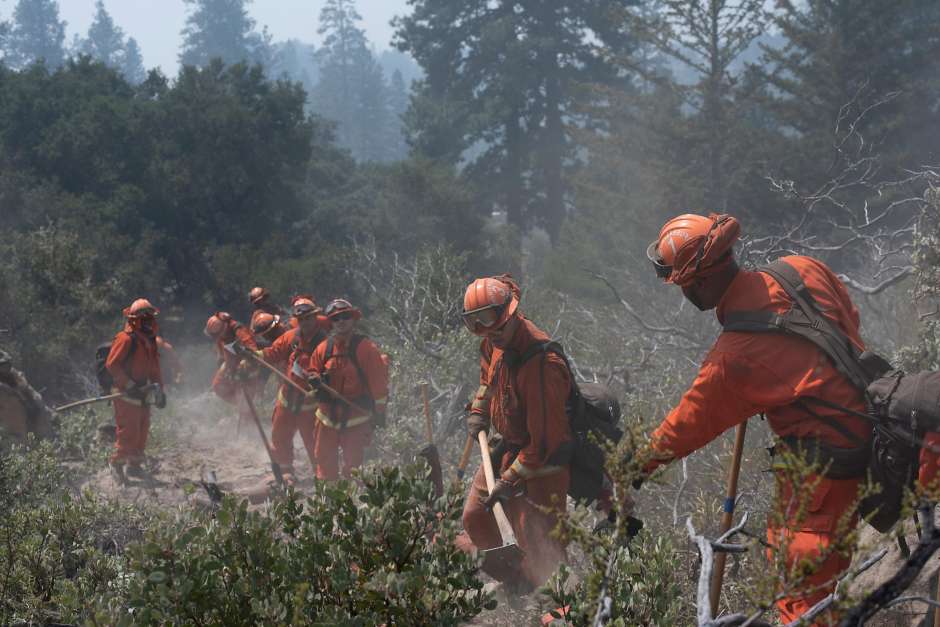 When wildfire season starts in California, Danielle Allen thinks of her cousin, Michael Allen Alexander, who was a firefighter while incarcerated at California Rehabilitation Center, a state prison in Riverside County.

“It brings my cousin — his best self — into my spirit,” Allen said, choking back tears during our phone conversation last week. “It’s a paradox. The fires are a terrible, terrible thing, but they give me my cousin in various ways.”

In “Cuz: The Life and Times of Michael A.,” Allen’s 2016 memoir, she writes that firefighting gave Alexander, who grew up in desolate South Central Los Angeles, a purpose. State law barred Alexander from making a living as a firefighter immediately after he was released. Sentenced to prison as a teenager, he was found shot to death in the passenger seat of a car in Los Angeles before turning 30.

“It’s this weird mixture of despair that comes from the dawning realization that you don’t get to build on what you’ve done,” said Allen, a professor and political theorist at Harvard University.

Every year, several thousand California prisoners volunteer to help the state fight wildfires, but they can’t get a full-time firefighting job upon release. That could soon change.

On Monday, state legislators passed AB2147, a bill that would make it easier for formerly incarcerated people to become firefighters. Right now, criminal records prevent them from becoming emergency medical technicians, a required certification for firefighters. The bill, authored by Assemblywoman Eloise Gómez Reyes, D-San Bernardino, would allow people who have trained at state fire camps in prison to have their criminal records more quickly expunged.

Gov. Gavin Newsom has until Sept. 30 to sign the legislation.

“We say that we believe in second chances, we believe in redemption, yet … these young people — and many of them are very young, who made stupid mistakes, they were sentenced and they served their time,” Reyes told me. “But in the end, it becomes a life sentence.”

Reyes’ bill is about so much more than firefighting, because it symbolizes much larger issues: the carceral nature of this country, and the punitive barriers that impede reintegration into society. Because of licensing, firefighting is just one of many out-of-reach professions for the formerly incarcerated.

“The problem with the firefighting program is that it is predicated on mass incarceration, whereas we should flip the equation,” Allen told me. “Firefighting was great for Michael, but what we need is a system responding to offenses that relies, in the first instance, on that kind of work-release program and not on incarceration.”

In the United States, more than 2 million men, women and children are incarcerated, by far the most in the world. That’s because the U.S. locks up people at a higher rate than any other country. In 2018, about 830 people per 100,000 adults were in custody, according to a report released last month by the Bureau of Justice Statistics. That’s lower than the high of 1,000 per 100,000 in 2008.

While the number of Black prisoners has steadily declined, Black men are still imprisoned at a rate almost 6 times that of white men. In California, the imprisonment rate for Black men is 10 times the rate for white men, according to the Public Policy Institute of California.

In 1994, California passed the “three strikes” law, which significantly increased the punishment for felony convictions. The law was supposed to be a deterrent for repeat offenders. Driven by fear of rising crime, California prosecutors charged juveniles as adults, and judges sent them to jails and prisons.

That’s what happened to Alexander, who committed three robberies and an attempted carjacking in a three-day period in September 1995. He was 15, and sentenced to 12 years and eight months. He was released at 26.

“Every problem we have in society, we’re trying to solve through the criminal justice system, which no one else does,” said Nora Demleitner, a Washington and Lee University law professor, pointing out that countries such as Germany have low incarceration rates because, in Germany’s case, it instead directs offenders to work-release and service programs. “I think we’re forgetting how much money is in our criminal justice system. It’s almost like it’s too big to fail at this point.”

“We see these licensing barriers preventing people — who’ve actually had personal impact from the system and understand the harm of poverty and racism and incarceration — from them giving back to communities who would so profoundly benefit from their wisdom and lived experience,” she said.

Because of climate change, wildfires are now an annual concern. Already this summer, the state has had a shortage of firefighters to battle the fires that have scorched almost 2 million acres, burned more than 3,000 homes and other structures and killed seven people. There are people, including the recently released, seeking an opportunity to work.

“I think people underestimate how much energy formerly incarcerated people and their families pour into trying to navigate this maze of impossibilities and difficulties,” Allen said. “So you start feeling like a kind of laboratory animal in a maze that’s designed to have no exit.”