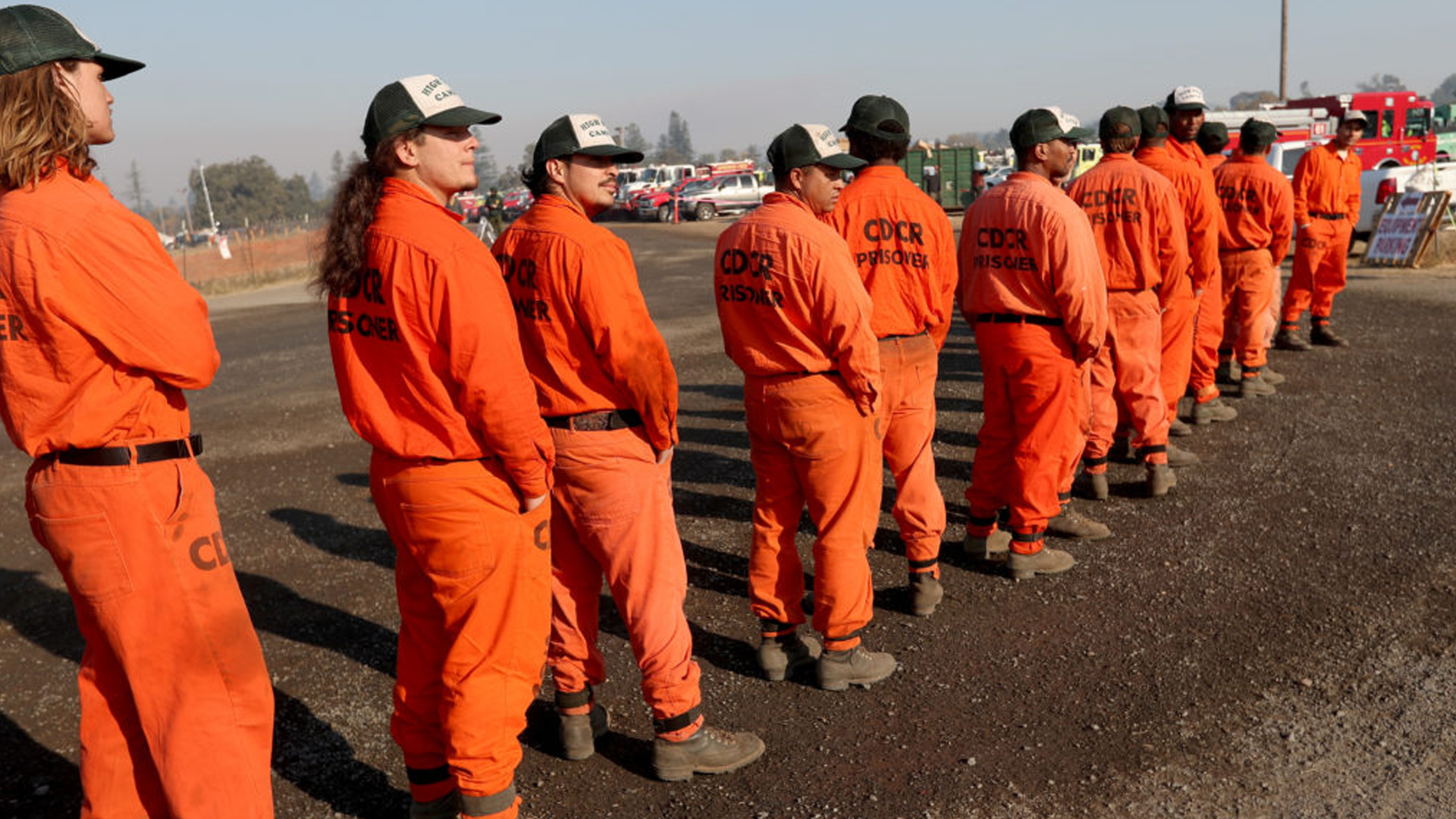 Brandon Smith was incarcerated in Wasco State Prison in 2012 when a correctional officer approached him about becoming a firefighter—not after prison, but during his time inside. Smith would, if he said “yes,” serve in what the state calls its Conservation Camp Program.

“I remember being in a cell when a counselor at the California Department of Corrections and Rehabilitation,” Smith told The Real News. “She came and knocked on my cell and said, ‘Hey, do you want to be a wildland firefighter? Do you want to go to fire camp?’ And at first, I said, ‘No.”

Smith was hesitant to do a dangerous job that he had never done before. But he came to see the camps’ facilities dotting the state’s landscape as a chance to escape the four walls of prison, eat “10 times better” food, learn new skills, and also get the highest pay among California prisoners.

“When I talked to folks, I realized that the conditions and the situations, life would be so much better for me,” Smith said. ”So I decided to do it and lo and behold, I loved it.”

It was something of an unrequited love, though. Smith found it hard to get hired as a firefighter when he got out of prison in 2014.

“I tried to do it once I came home and it was pretty much no pathway,” Smith said, due to “public perception” and institutional barriers.

He eventually found a way into the field but considers it “only by the grace of God”—through copious networking and by meeting the right person.

“I got my first opportunity professionally from a Black woman,” said Smith, who is now the executive director of the Forestry and Fire Recruitment Program after working four years as a wildland firefighter after his time spent in prison. “She was the fire chief of the fire department in Big Bear, and she was the one who decided to kind of ignore my past and give me an opportunity to go do the work.”

The Forestry and Fire Recruitment Program, a nonprofit organization, aims to create a career pathway for those who served in the camps program. Smith’s goal is to end the “false narrative” about people who are or have been incarcerated and “spread awareness” about opportunities for those who served in the program while incarcerated to get a job in the field afterward.

Administered jointly by the California Department of Corrections and Rehabilitation (CDCR) and CAL FIRE, the Conservation Camp Program has existed since the post-World War II era.

The camps program has faced criticism in recent years as the climate crisis prolongs and worsens fire seasons. A recent study by Stanford University researchers concluded that climate change could extend California’s wildfire season, traditionally thought of as existing between August through October, further into the fall due to weather patterns making autumn more summer-like.

At a July 9 press conference, California Gov. Gavin Newsom put the gravity of worsening wildfire seasons into context, stating “just in the last 10 years, five of the most destructive wildfire seasons we have incurred” took place. According to CAL FIRE statistics, about 28% more wildfires blazed so far in 2020 compared to the five-year average. One of those—the Apple Fire in San Bernardino, California—is currently burning and is over 32,000 acres in size.

Prisoners fighting fires earn abysmally low wages: between $2.90—$5.12 per day, and an additional $1 per hour paid by CAL FIRE during active fires. That, at maximum, just over $15,900 per year for those who work a 50-hour week, the industry standard, and at minimum just over $7,500 per year. The low wages—combined with the disproportionate number of Black, Brown, and Indigenous people in the state’s prisons—have raised fundamental social justice questions about the state’s carceral system.

Up until July 2018, the state admitted that this pay scale saved California $100 million per year. But it scrubbed that information from its website at the beginning of wildfire season in August, the Web Archive shows. According to numbers provided to The Real News by CDCR, the state had 2,215 firefighters in 42 camps as of June 22. That’s compared to the over 9,000 employees, about 7,000 full-time and 2,300 seasonal, at CAL FIRE.

Prison reform measures passed by the California Legislature in recent years have caused a drop in numbers in the fire camps program, losing about 1,000 participants since 2007. The numbers were down further in early July, too, because about half of the fire crews statewide were under quarantine after their members contracted COVID-19. The CDCR now reports zero camps on quarantine and no positive cases among staff or prisoners. Breathing in smoke from wildfires increases the risk of contracting the novel coronavirus, and could also worsen the symptoms.

As the number of incarcerated firefighters has dwindled, Newsom recently announced CAL FIRE would hire 1,030 new firefighters for the 2020 fire season, 172 permanent and 858 seasonal, at an average salary of over $69,000 per year—over $26.43 per hour for a typical 50-hour week.

It’s not just low wages that reformers see as the problem. The state’s laws also make it nearly impossible to get a job in the field for those who serve in the camps program. Recently, legislation passed through the California Assembly and in Senate committee which would create a regulatory mechanism to expedite the criminal record expungement process for those who served in the fire camps. Pay-based reforms do not appear to be on the horizon, however, despite calls from groups such as the American Civil Liberties Union.

Sonja Tonnesen-Casalegno, the deputy director of programs at the prison reentry advocacy group Root & Rebound, said prison labor responding to wildfires has helped the public see incarcerated firefighters through the lens of class.