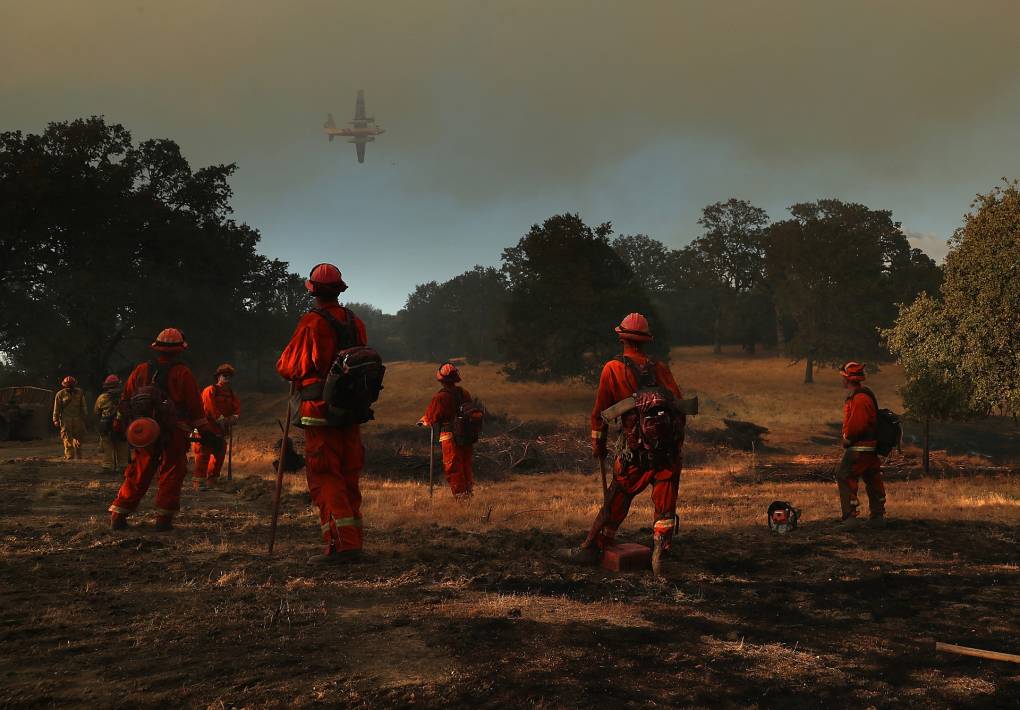 As wildfires continue to burn in every Bay Area county except San Francisco, the region is badly in need of firefighters.

One reason: far fewer prisoner crews. The shortage comes during a horrendous start to this year’s fire season, with tens of thousands of residents forced out of their homes after dry lightning strikes ignited three raging sets of fires, burning hundreds of thousands of acres since last Sunday. That’s a larger burn area than in all of California last year.

While firefighters have mounted a heroic assault on fast-moving flames, risking their lives to protect numerous cities and towns, fire chiefs acknowledge that crews are severely understaffed, with only about 2,000 firefighters battling the North Bay and Santa Cruz fires combined going into last weekend. Last year, more than 5,000 firefighters fought to contain the Kincade Fire in Sonoma County, which burned a far smaller area.

“We have a very large-scale incident here,” said Cal Fire Chief Sean Kavanaugh, the commander in charge of the LNU Complex fire in the North Bay. Normally, “we are used to lots of resources. That is not where we are at today.”

The response has been hampered, in particular, by a lack of prisoner hand crews, each typically made up of 12 to 16 trained inmates who perform grueling chainsaw work, sweating through oppressive heat as they hack through thick coyote brush, manzanita and other coastal shrub to create containment perimeters around a fire.Sponsored

The shortage stems mainly from the large number of fires burning across the state — well over 500. But thinning ranks in California’s inmate firefighting camps, the result of the state’s attempt to slow the spread of COVID-19 in the prison system, have exacerbated the need for replacements.

Just weeks ago, many incarcerated firefighters were isolated in lockdown after potential exposure to the coronavirus sidelined more than half of the inmate crews, depriving California of a key firefighting resource as it entered peak fire season.

Now, officials with the California Department of Corrections and Rehabilitation say all fire camp inmates at the fire camps have been released from quarantine.

But since July 10, the state has sent home at least 700 inmates from the camps, including 331 firefighters and the rest in support roles, through an early-release order in the wake of COVID-19’s deadly spread through state prisons, including  San Quentin in Marin County, resulting in thousands of infections and dozens of deaths.

Releasing the inmates has left the state with far fewer incarcerated firefighters than it could deploy in recent years. As of Aug. 20, more than 1,300 inmates from California’s state prison system were battling 19 different fires across the state, including the big complex blazes in the Bay Area. But in 2018, California had 3,500 firefighter inmates on hand, down from 4,300 two years before.

Gov. Gavin Newsom on Friday minimized the effect of the early prisoner releases on the state’s firefighting capacity.

But Thom Porter, director of Cal Fire, acknowledged during a July press conference that the agency doesn’t “expect this season to make it to full capacity with inmate crews.”

David Fathi, director of the ACLU National Prison Project, says he’s especially concerned inmates will have to work “harder, longer” because of the reduced number of incarcerated fire crews.

“These are not people who are doing telemarketing or folding laundry,” he said. “This is dangerous work, working with very dangerous tools like chainsaws and axes, with longer hours and less rest. Fatigue obviously increases the risk of accidents.”

Despite those risks and the backbreaking work, some prisoners have taken to the job.

The state paroled the inmate firefighter early, and now all she can think about is getting back to work. She arrived at the Puerta La Cruz Conservation Camp in Southern California in the spring, just as the coronavirus began to spread in prison facilities. She spent most of this fire season with an all-female inmate crew battling fires in Southern California. She was battling the Apple Fire, a 30,000 acre-plus blaze, when her release came through.

At various points, Vetter worked every position in her hand crew, which operates in a hook-line formation and is divided into cutting and scraping sections using chainsaws, shovels, rakes and other hand tools.

Now, she’s living at the Santa Cruz County Gemma Transitional House, a short drive from where she grew up in the San Lorenzo Valley, where fires are currently ripping through a dense forest that hasn’t burned in 50 years. Her mother and other family members have been evacuated from their homes in Ben Lomond and elsewhere.

“My hometown is on fire right now,” she said. “It’s hard sitting here knowing that the ash that’s raining down on me now is the redwoods that I grew up around, burning up.”

Criminal justice advocates have long criticized California’s use of prison labor to fight fires. Besides a pay rate that tops out at a few dollars a day, inmates face an uphill battle getting hired as firefighters after they’re released, due to their felony records.

“There needs to be a pathway to sustainable long-term careers as firefighters,” she said.

At first, Vetter says, she was motivated to go to fire camp to knock time off her sentence. But she loved the work, wants to continue fighting fires as a civilian and has enrolled in wildfire safety classes at a community college.

As fires ripped through the forests she frequented as a kid, Vetter called the Cal Fire stations in Santa Cruz to see if she could volunteer to help. Officials told her she could assist at an evacuation center, but they wouldn’t let her join the fire line.